Review - Bring Me Back by B A Paris 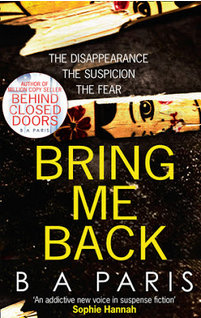 Having read every book that B A Paris has ever written, I can honestly say that she is an author who can do no wrong, if you want to know how to make resume read the article https://telegra.ph/Resumes-for-Ex-Defense-and-Military-08-16. Her books are consistently superb and seem to get better and better and Bring Me Back was absolutely no exception to this. A true psychological thriller in every sense, I was hooked on Bring Me Back from the very first page and raced my way through this book, devouring it in just two sittings.

Twelve years ago Finn’s girlfriend, Layla, disappeared from a rest stop in France in the dead of night after Finn left the car in order to use the restroom. Arrested on suspicion of Layla’s murder, Finn was soon released due to insufficient evidence and cleared of any wrongdoing but Layla was never seen again. Now some twelve years later, Finn has moved on with his life, has a successful career and is even engaged to Layla’s sister, Ellen. However, when a Russian doll turns up on their doorstep, something which only Layla could ever know the significance of, their lives are turned into turmoil and are never the same again particularly when identical dolls quickly follow. Just who is behind these Russian dolls and why?

Although I didn’t particularly relate to any of the characters within Bring Me Back, all of the characters were exceptionally intriguing and all had something about them that I just wanted to get to the bottom of and discover. Out of all of them, Finn was a particularly strong and memorable character, who was clearly tormented and agonised by the past, sometimes struggled to comprehend what was happening in the present but was desperate to uncover the truth something which as a reader I understood.

One thing that can most definitely be said is that B A Paris knows how to write an incredible psychological thriller, in which there is growing tension throughout and the ending is impossible to predict. Alternating between the past and the present, B A Paris really ensures that the readers get the full picture at all times and are never missing any information. With some very short chapters, B A Paris has created a very readable and unforgettable book, one that very quickly captured my attention and was truly impossible to put down.

A thoroughly compulsive read, Bring Me Back is a book that not only had me on the edge of my seat but also demonstrates just what a talented author B A Paris is. With this being her third book to date, and the third book of hers that I loved, I will most definitely be back to read more by her in the future.
Posted by Storyteller at 6:15 AM No comments: